Worship Service is held the 1st and 3rd Sunday each month in our sancuary at 11:00 am.

All other Sunday Services are held virtually.

VIRTUAL SERVICES ARE HELD VIA ZOOM MEETING AND ZOOM BY PHONE

All the latest News and Events from our community.

For your convenience, you can now download our church bulletins.

Bulletins are in PDF format.

Note: You must have Adobe Reader installed on your computer to view the file.

Adobe Reader is also available on our Downloads page.

“I have surely built thee an house to dwell in, a settled place for thee to abide in forever.” – I Kings 8:13

In the early 1900’s, citizens in the village of Babylon gathered together in the spirit of the free African Society of Philadelphia and the mission of Richard Allen’s A.M.E. Church.

On January 3, 1906, six dedicated members under the leadership of Reverend John Cuff, purchased a plot of land costing $700.00, in order to erect a church.

The original Trustees were: Lemuel Murray, John Althauss and George Queen.  As recorded in the Southside Signal newspaper, Mr. Queen was a member of the “True Reformers” lodge.  This organization was “colored owned” and “conducted a system of stores with an annual business of $100,000.

On Tuesday, October 31, 1911, Bethel Church was found ablaze at 12:45am. The church was totally destroyed.  Although investigated by local officials, the cause was never found. The church was insured for $4,500.00.  The assigned minister was Reverend Murcherson and the membership was 24 people.

The church was rebuilt in 1913.  In the ensuing years, Bethel, Babylon continued to be a circuit church on the Brooklyn-Long Island District. Although small in number, the congregation diligently worked in God’s vineyard.

There have been several ministers over the 114 years that have served Bethel, Babylon.  Many of their names and time of service are not be accurately documented, but their labor will never forgotten.  Three of our former pastors of record were Reverend Murcherson, Reverend Irons, Reverend Charles Gadsden and Reverend Joseph McKenzie.

The minster with the longest tenure (16 years) was the beloved, Reverend Aaron E. Stewart.  His tenure was 1956 through 1971.  During his assignment the church building was totally remodeled; adding a dining area and enlarging the sanctuary.  The youth choir was formed and named the “A.E. Stewart Choir.”  On December 12, 1971, the church was dedicated by Bishop John D. Bright.  Many local church leaders and dignitaries from the community were present.

In 1971, Reverend Edward Jermont was assigned to Bethel Babylon for six months.

From June 1972 through May 19, 1972 – Reverend Abner Freeman was assigned to Bethel, Babylon.  Rev. Freeman died while serving Babylon.

Reverend Ernest Boston was assigned to Bethel, Babylon from June 1972 through June 1973.

Reverend Rudolf Douglas was assigned to Bethel, Babylon from June 1973 through June 1974.

Reverend Charles Bryant was assigned to Bethel Babylon from June 1974 through June 1975.

Reverend Theodore Nichols was assigned to Bethel, Babylon from June 1975 through May 1984.  During his tenure, Bethel, Babylon, had its first Associate Minister, Reverend Charles Spruill.  The officers of the church rallied to purchase 46 Cooper Street to serve as the parsonage and the kitchen area was refurbished.  In 1977, the parsonage was dedicated by Bishop Richard Allen Hilderbrand.

Reverend Paul Q. Baker was assigned to Bethel Babylon from May, 1984 through May, 1990.  A second Associate Minister, Reverend Oliver Young, formerly of Bridge Street AME Church, Brooklyn served the church.  During Reverend Baker’s tenure, the Trustees and members paid for the installation of aluminum siding to the church exterior and new church windows installed.

In May, 1990 through May, 1993, Reverend Carlton Gibson was assigned to Bethel, Babylon.  During his tenure, youth activity increased and the Sunday School expanded.  Also, the Trustees and members decided to restructure the parsonage into a two apartment dwelling.  In 1991, the parsonage was rededicated by Bishop Frank C. Cummings.

Reverend Larry Jennings was assigned to Bethel Babylon from May, 1994 through June, 2008. During his tenure liturgical dance was initiated, and the Male Chorus.  The church also purchased a new piano.  In December,2007, Reverend Jennings led in the commemoration of the 100th Church Anniversary.  Bishop Richard F. Norris, was the guest speaker.

Our current pastor is the Reverend Leonard M. Davis.  He was appointed by Bishop Richard F. Norris on June 14, 2008.  The first lady, Sister Margaret (Peg) Davis was the first WMS Life member to serve at Bethel, Babylon. Under their leadership we have accomplished the following:

We launched the Justin J. Shippy Scholarship Fund to assist Bethel’s young people who will graduate from high school and continue their education.  The fund was started under the pastorate of Rev. Jennings.

May, 2019, Reverend Leonard M. Davis retired from the active pastorate.

Now in our 114th year, we continue to work at a high level of energy of the Lord!  We look forward to greater things in Him ,“To God Be The Glory”. 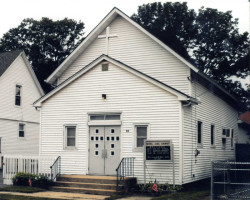